Did you know men are less healthy and have a shorter life expectancy than women, on average? Part of this is because men are more likely to go long periods of time without going to the doctor, they’re less likely to adopt preventive health measures and are more likely to engage in risky behaviors.¹

Each year, in the week leading up to Father’s Day, our Nation recognizes Men’s Health Week to raise awareness of the diseases and illnesses that affect America’s men. By better understanding the unique risk factors that men face, we can promote healthier lifestyles and implement more effective prevention and treatment options for all men.

Why is this important? The STATS. 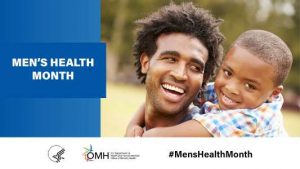 During Men’s Health Month, we encourage men to take control of their health. Let’s focus on encouraging men and their families to practice and implement healthy living decisions, such as exercising and eating healthy. As we age, healthy eating and exercise can:

Many health conditions can be detected early with regular checkups. Regular screenings may include blood pressure, cholesterol, glucose, prostate health and more. Access the Check-Up and Screening Guideline for Men.